When I went to that craft night back in April (the one where I made the "Stuff" board) most everyone else made "Look What I Did" boards. They are a place for kids to display their artwork, school projects, etc.
After finding a scrap piece of wood in Shelly's trailer, I decided to make one for my nephew Corbin's first birthday. I searched forever for Circus themed paper since I know that is how his nursery is decorated, but I was unsucessful. So I went with the Zoo theme. I lucked out and found the perfect ribbon for it, too - 50% off at Hobby Lobby. It's hard to find ribbon that is appropriate for a boy, but I think the zebra print is perfect.

I started by painting the board black using regular craft paint.

Then I arranged my paper on the board until I found the arrangement that pleased me the most. I decided that I wanted the letters on a neutral background so that you could see them clearly. I measured the letters to make sure I allowed enough of that background. There was a lot of thought and math involved, and I probably spent way too much time thinking about the best layout. I tend to overthink things. (Helpful Hint: Take a picture of the arrangement in case you forget it when you go to apply the modpodge.)

I then covered the board with a couple layers of modpodge.

Meanwhile, while that was drying, I started work on the clothespins. I decided on small craft clothespins instead of the regular size ones because the regular ones cover up too much of the paper. Just make sure your small clothespins are strong enough to hold paper - - you wouldn't want to end up with a finished project you couldn't use, right?
I cut paper to fit on the front of the clothespin, glued them on, and then covered with a great product called Diamond Glaze. It's hard to find, but it's really awesome. You can apply it to just about anything to create a clear, raised, hard finish. Almost like epoxy, but much easier to use. It can also be used as a very strong glue.
I applied the Diamond Glaze in a line on the clothespin, and then spread it around evenly with a toothpick. I then let them dry FLAT (very important to get the finish to look right) by clipping them to a notepad that was just the right width.

Once the clothespins were dry, I glued them to the board with the Diamond Glaze. I applied the letters, placing the first and last letters to begin with, then filling in the rest so that they would be spaced evenly.
Then I took the board over to Mom and Shelly's house so that Shelly could drill a couple 1/4" diameter holes in stratigically placed spots. I threaded the ribbon through, tied some knots and I was done.
Here it is.

Corbin's parents seemed to like it. Since he is only 1, he probably won't have a whole lot to display on the board for a while. Until then, his parents can use it to post notes and reminders, or even hang up a bib to dry. (That is one of the next things I am going to make for myself. Now that Eva is eating baby food, we have to pratically hose down her bibs after she eats. It would be nice to have a place to hang them to dry.)
Posted by Corrie at 10:52 AM 2 comments:

And another completed project!

I can't believe I have completed another project!!! Well, I haven't hung it up anywhere, so I guess I'm not completely completed...

I found a cute peg board at Goodwill for $1.29. Of course I didn't take a picture of it, but I did take a picture of the other one I bought. It was just like this, except a funky bad shade of pink (pepto-bismol) and had a butterfly on it instead of a whale. 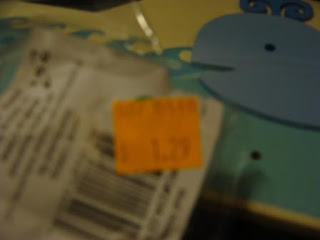 I removed the butterfly and covered the board with cute baby girl paper I got from my mom (free!) and mod podge, 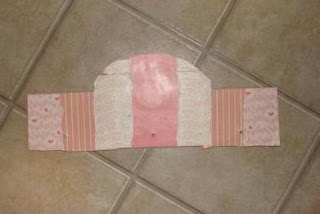 covered raw chipboard letters with coordinating paper, then attached to the board, 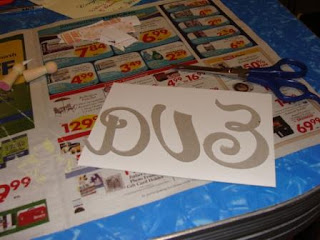 mod podged it again, then sanded around the edges, 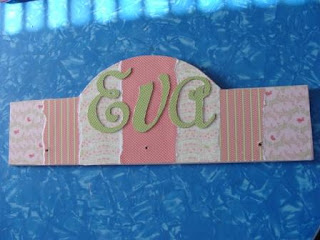 dry-brushed some sage green paint on the pegs 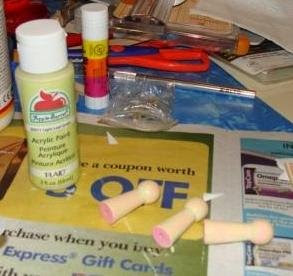 and assembled it. Voila!

I just can't decide where to hang it. Her bedroom is too full of stuff already, and I was going to put it in our entry way but it clashes with all of the Buckeye stuff. I'll figure something out.
And I still have to figure out what to do with the whale peg board. It is cute as can be as is, but again I don't really have a place for it.
Posted by Corrie at 3:35 PM 1 comment:

I start lots of projects and rarely finish them. Or I'll finish them and do nothing with them.
Well, I made this board back in April at a Craft Night at my cousin's house. (click here to be directed to her blog post about it.)


So, 2 months later, I have finally hung it up in my kitchen. Yay! Thanks to 3M Command strips, it was an easy job. I still need to make it level. Gotta find our level first.

Here it is hanging on the wall in our kitchen. 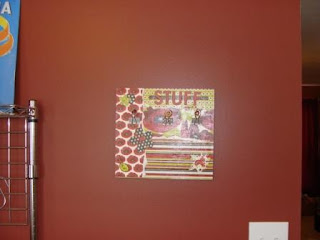 And here it is with stuff on it. 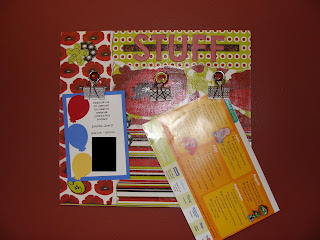 See that invitation on there for a birthday party? It's for my nephew Corbin. I made something special for him for his birthday gift. I'll post about it after the party.
Posted by Corrie at 6:10 PM 3 comments:

For my dad (Eva's Pawpaw) for Father's Day, I picked up a $1 frame from Michael's. I "modpodged" it with some of my $6.99 paper, and then added some chipboard letters I had from Flower Factory. And then I put in a picture of the two of them from the day she was born.
Here is the result. 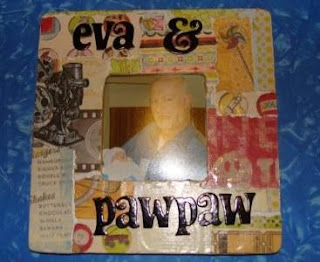 And here is the card I made for my Dad out of the front of an old greeting card I had. The mid-century modern style furniture in the drawing is so my dad. I guess I didn't take pictures of the book I made for Shelly (my stepfather and Eva's Baba.) Hopefully I can get pictures from my mom. I'll also need to get a picture of the card I made for Dan - which was really awesome, if I do say so myself!
Posted by Corrie at 6:01 PM 1 comment:

For Dan for Father's Day, I wanted to make him something special...

I found a star shaped blank chipboard book for $1 in the dollar bins at Michael's. This would be my starting off point.
And then I found a great stack of 12x12 scrapbook paper on clearance for only $6.99! I've been searching for a perfect stack of paper for a while - - one that included a variety of prints. If I was going to spend $20 on paper, I didn't want to just get one theme, such as baby girl, travel, etc. I was beginning to think that it didn't exist. So this "perfect" stack I found had a little bit of everything and was double sided. I was all ready to use my 40% off coupon, so then it would be $12 (aren't you impressed with my math skills?) but it rang up as $6.99. No coupon needed (or allowed)! I also bought a sticker pack of dad related stickers and I knew I already had plenty of letter stickers and chipboard at home.

All of that came together to make this: 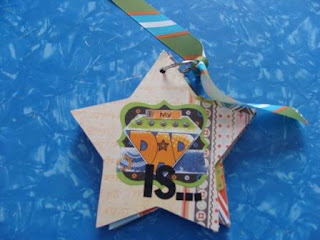 D is for Doting - anyone who knows Dan or has seen him with Eva knows how much of a doting dad he is! I included a picture of them cuddling on the couch. 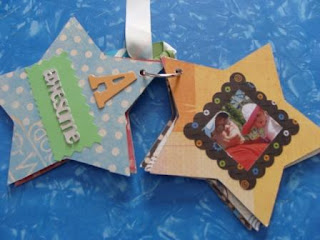 A is for Awesome - I included a picture of Eva and her daddy at the zoo. 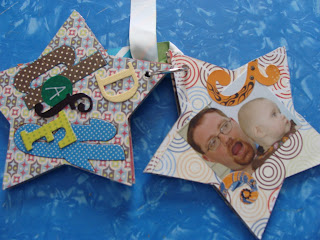 The other D in DAD is for Daffy - - now, I had a hard time coming up with another D word to describe Dan and his relationship with Eva. When I came across the word Daffy in an online search, I was pleased. That is the perfect word to describe him!!! And then I just included a picture of Dan being daffy and Eva being Miss Serious. 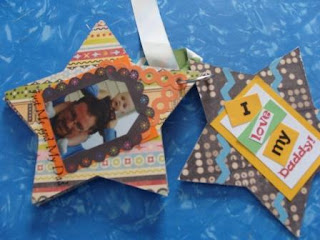 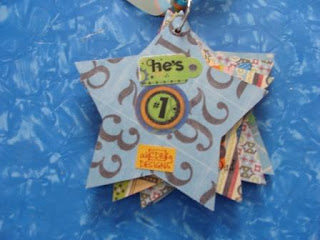 So that's it! Dan was thrilled and I won't even tell you how many hours this took to make. But it was all worth it!!!

After my daughter Eva was born last November, it was hard enough figuring out how to be a mom. But then a couple of months after I returned to work I was laid off - that was harder. I also found out at around the same time that I am diabetic (Type 2) which is hard as well - and admittedly I am not doing well with watching what I eat, but that's a whole other post. This all led to suffering from depression and anxiety - which I'm currently being treated for and am glad to say that I am doing MUCH better than I was a few months ago.

So here I am, trying to handle my new life as a stay at home mom - something that I really never had a desire to do, but I'm glad that it has happened while Eva is still a baby.

I'm making lots of mistakes, but have had a lot of successes, too. This "new" blog will be a place for me to share both.

It will also be a place to share my creativity. I've always been an artist, but in the last few years I must have lost my inspiration or something. Now I'm back in the saddle and creating up a storm.

Corrie
I am a wife, mother, daughter, sister, artist, cook, tv watcher, celebrity watcher, trivia hound, procrastinating blogger, mess maker and so many other things. A lot has changed in my life over the last few years, but I'm learning that change is good.